Microsoft introduced the Protected Users group in Windows Server 2012 R2 and Windows 8.1, and it’s designed to harden accounts that are group members, in particular to protect against pass-the-hash attacks by disabling the use of NT LAN Manager (NTLM), a legacy authentication protocol that’s still present in Windows for backwards compatibility.

Protected Users is primarily intended for use with domain and enterprise administrator accounts, which are particularly susceptible to attack, as when compromised they provide wide-open access to systems. That’s not to say that other user accounts, that might be considered a target, can’t be added to Protected Users. But because of the tight restrictions placed on members of Protected Users, it’s essential to perform thorough testing beforehand.

There are no workarounds for the restrictions, so it’s wise to make sure that if you intend to add highly-privileged accounts, like domain and enterprise administrators, that at least one that’s not used for regular administration tasks, is left outside of the group.

The following protections are enabled for members of the Protected Users group when logging in from a supported device:

If the domain functional level is set to Windows Server 2012 R2 or higher, additional protections are enabled:

When DES and RC4 are blocked, all domain controllers (DC) must be running Windows Server 2008 (or later), and before adding users to Protected Users, their passwords should be changed against a Windows Server 2008 DC so that the AES keys are stored in Active Directory.

I Can’t See the Protected Users Group in my Domain

To check if you have the Protected Users group in your domain, log in to Windows Server 2012 R2 as a domain administrator:

If Protected Users is present in the domain, you should see it on the right. Users can be added to Protected Users, as you would add them to any AD group. Using PowerShell for example, to add the admin1 user account: 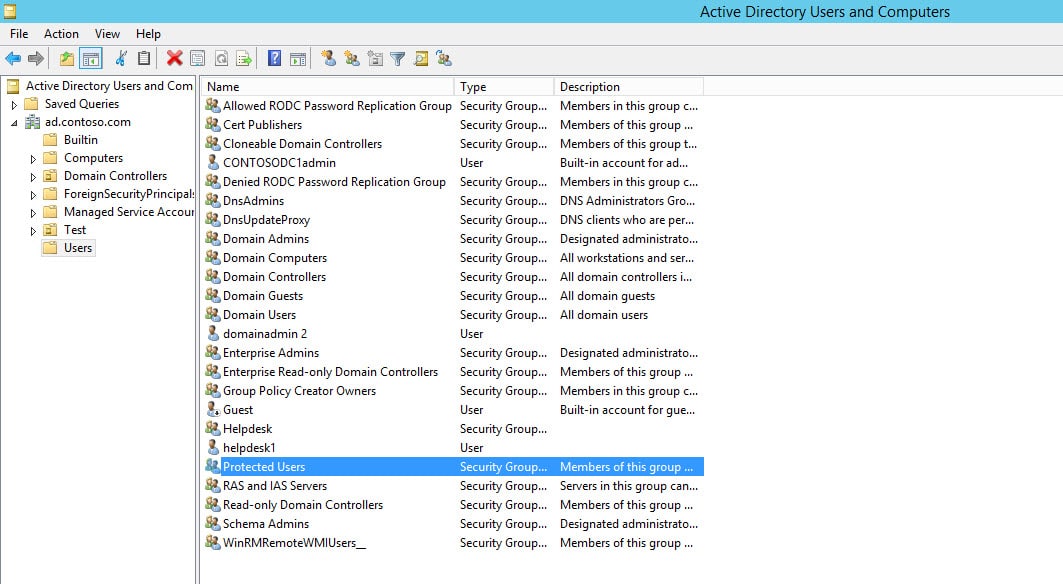 If you want to confirm the new or original location of the PDC emulator FSMO role, run the command below, replacing ad.contoso.com with the name of your AD domain:

Russell Smith
IT consultant and author specializing in management and security technologies. Russell has more than 15 years of experience in IT, he has written a book on Windows security, and he coauthored a text for Microsoft’s Official Academic Course (MOAC) series.