Microsoft Active Directory serves as a centralized point for the administration, authorization and authentication. In AD, access to network resources is granted to security principals, such as user accounts and computer accounts, and those permissions can change over time. To simplify access management and improve security, medium and large companies often use Active Directory security groups, which can contain user accounts, computer accounts and other groups. They often also use distribution groups to manage email distribution lists. Both security and distribution groups have unique security identifiers (SIDs) and globally unique identifiers (GUIDs).

The ADUC MMC snap-in is great for managing both types of groups, but PowerShell is a much more efficient way to manage them in bulk.

If you’re not already familiar with AD groups and group management, please read the Active Directory Group Management Best Practice guide before you move on.

Also, keep in mind that in order to use these PowerShell scripts, you must import the module for interacting with AD — the Active Directory Module for Microsoft Windows PowerShell. This module was introduced in Windows Server 2008 R2 and is enabled by default in Windows Server 2012 and later. You can get the full list of AD module cmdlets by running the following command:

The full list contains 147 cmdlets; however, only these eleven are related to Active Directory groups:

To create an AD group, use the New-ADGroup cmdlet. You can get its syntax by running the following command:

The easiest way to create a group is to run this short script:

The system will ask you to specify the “GroupScope” parameter, and then it will create a new group. However, this group will have default values, such as:

To delete an AD group, use the Remove-ADGroup cmdlet. The easiest script for that will look like this:

You’ll be prompted to confirm the deletion of the group.

Adding Users and Computers to a Group with PowerShell

You can add users to an AD group with the Add-AdGroupMember cmdlet. For instance, if you needed to add two users, B.Jackson and E.Franklin, to the “Quality” group, here is what the script would look like:

Once you’ve added users to a security group, you can run the script below to verify that they are listed as members:

Adding a User to Multiple Groups

To add a user to multiple groups at once, run the following script.

You’ll be prompted to input the username.

Adding Users to a Group from a CSV file

If you want to add a large number of users to a group, you can specify them in a CSV file and then import that file. Note that the list of the usernames in the CSV file must contain the SamAccountNames in the “users” column, as shown below:

To add users to group from a CSV file, run the following PowerShell script: 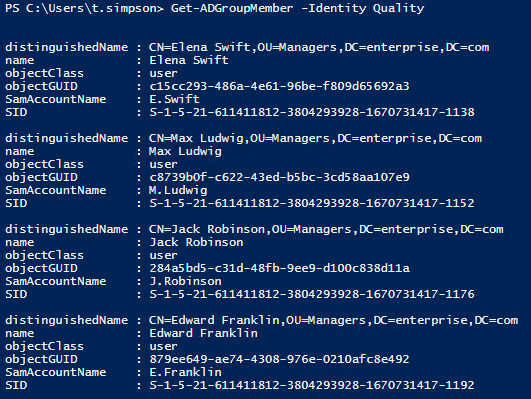 Copying Users from one Group to Another

If you want to copy all members from one group to another group, run the following script:

Removing Users or Computers from a Group

To remove a user from a group, use the Remove-ADGroupMember cmdlet:

To remove a computer account from a group, specify the computer name with a dollar sign ($) at the end for the value of the -Members parameter.

An easy way to remove multiple users from an AD group is to create a CSV file with the list of usernames and then remove those users from the group object using this script:

Removing a User from All Groups

To remove a user from all groups, run this script:

Note that the user will lose all group membership except “Domain Users”, which can be removed manually if needed.

Now that we know how to perform many common Active Directory management tasks related to groups using PowerShell, let’s see how to report on what groups exist in AD:

To list all groups in AD, use the script below:

Now that you’ve learned how to manage groups and group membership in Active Directory using PowerShell scripts, try performing some of the group management task yourself. However, be careful, and don’t forget to enable the Active Directory Recycle Bin feature so you can easily roll back your changes if something goes wrong. Remember, the ADUC MMC snap-in is great for managing groups and group membership, but PowerShell is much better for managing groups in bulk.

Jeff Melnick
Jeff is a Director of Global Solutions Engineering at Netwrix. He is a long-time Netwrix blogger, speaker, and presenter. In the Netwrix blog, Jeff shares lifehacks, tips and tricks that can dramatically improve your system administration experience.
Active DirectoryActive Directory toolsPowerShell
More great reading
Introduction to PowerShell

How to Create, Change and Test Passwords Using PowerShell

How to Create, Delete, Rename, Disable and Join Computers in AD Using PowerShell

Managing OUs and Moving Their Objects with PowerShell