How does your location measure up? To save you from having to browse tons of job openings and analyze current trends to answer that question, we’ve done the research for you. Read this blog post to discover how much sysadmins earn in different parts of the United States and how to factor in the cost of living in different areas. You might learn that you need to switch from flip flops to winter boots to find a position in which you have more disposable income.

How much does a system administrator make?

According to salary figures from Indeed.com for June 2020, the average system administrator salary in the U.S. is estimated to be $84,363 per year. The range is quite broad, with figures starting around $43,000 and reaching as high as $145,000.

Two main factors affect how much a sysadmin makes: years of experience and geographic location. Let’s dive into each of them.

Average salary of a system administrator by experience level

Here are the national average salaries for system administrators based on their years of experience, according to Glassdoor.com: 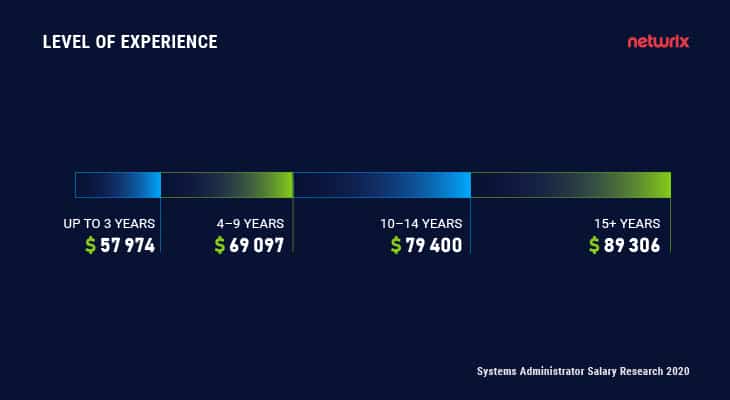 Senior system administrator salaries vary dramatically by location but according to Glassdoor.com, the national average earning is $81,745.

Having industry certifications can also be valuable in landing a senior position. 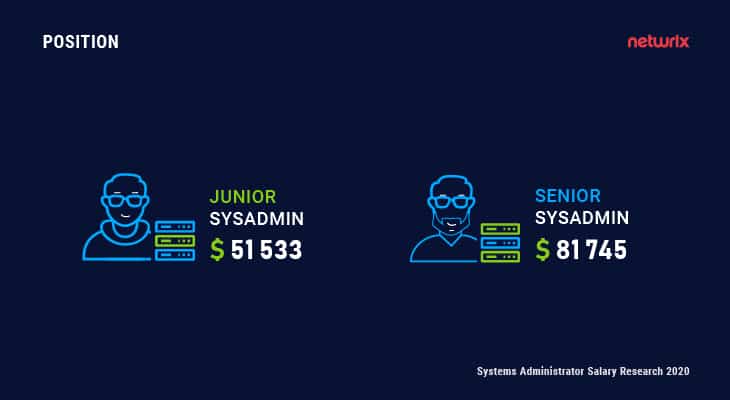 A bachelor’s degree is definitely worth having in terms of competitive compensation and career promotion in any information technology field, and system administration is no exception.

Average salary of a system administrator by location

States with the highest average salaries

The states with higher salaries are generally those with higher economic activity — they are home to Fortune 500 companies or provide a wide range of opportunities for businesses. Examples include Maryland, New York and California. 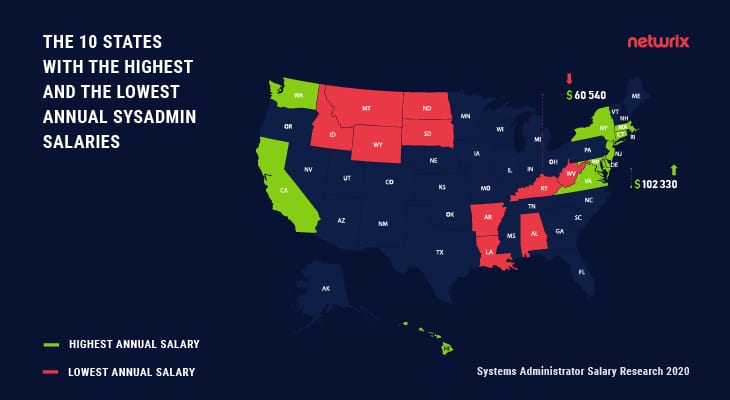 Here are the 10 states with the highest annual salaries for system administrators:

This data is from careerexplorer.com.

Note that Washington DC would make it into this list if it were a state, since it boasts an average annual salary of $99,953.

States with the lowest average salaries

At the other end of the spectrum are many states in the South, Midwest and the Rust Belt, where the average salary for system administrator is much lower due to poor economic growth, industry crises, and a dependence on agriculture instead of manufacturing and business. The only exception in the Midwest is Illinois; its average salary of $85,313 nearly puts the state into the top 10.

The 10 states with the lowest annual salaries for system administrators are:

This data is from careerexplorer.com

Where’s the best place for system administrators to work and live?

Of course, one reason salaries are higher in certain locations is that the cost of living is higher. To get a better measure of how far your salary will actually go, we looked into how rent varies by state (using Zillow.com). By dividing the average rent divided by the average sysadmin salary for each state, a different picture emerges of the best places to live from an economic perspective. 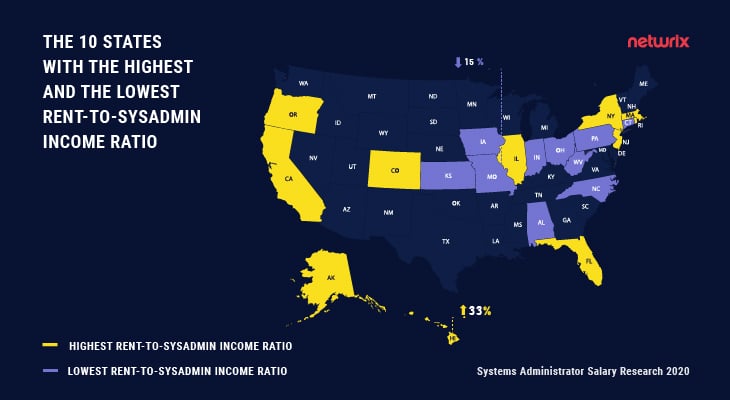 Here are the states with the highest ratios of rent to sysadmin salary:

And here are the states with the lowest ratios:

*The data for average rent is presented by Zillow.com

As you can see, several of the states with high sysadmin salaries also have extremely high monthly rent-to-income ratios (e.g., California, New York and New Jersey). Other places that are extremely expensive to live in cannot even boast of high sysadmin salaries (e.g., Alaska, Illinois and Vermont). Florida, which is now perceived as one of the most attractive places for startups, also has a high rent-to-income ratio (25%).

This analysis allows us to choose the best regions for system administrators to work and live in. The following three states boast both high salaries and a relatively low rent-to-income ratio: 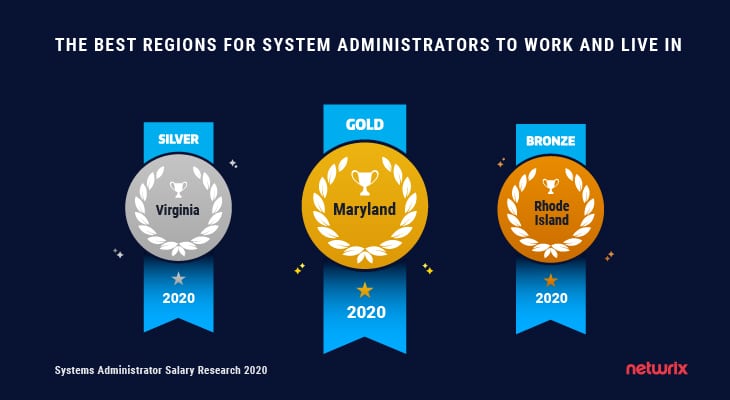 A high salary is no guarantee that a job will enable you to have a comfortable life. In particular, states that offer high annual salaries, a wide range of career opportunities and a good climate (e.g., California) are often very costly to live in. States that rank lower in average annual salary can actually be more affordable.

Of course, it’s up to you to decide what’s most important to you. You might be willing to work in a snowy area so you can afford a comfortable house, or you might be willing to sacrifice space and pocket money in order to live in a trendy place with nice weather as you build your career in a big city like New York or San Francisco. The only advice here is that looking at the hard numbers is always a good start to find jobs. We hope this overview will help you to make wise career choices.

How to Create a Dynamite System Administrator Resume 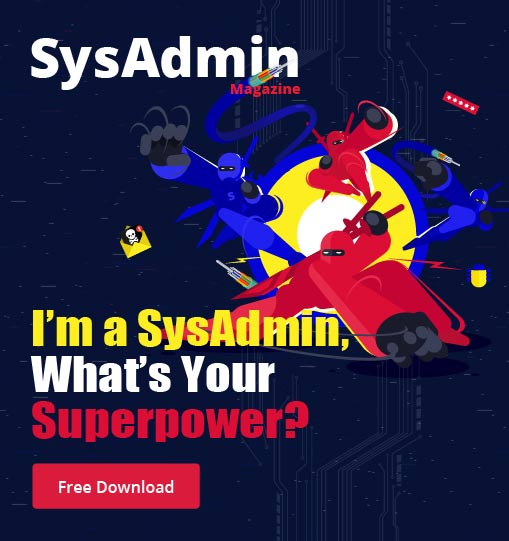