Maintaining the performance and security of your virtual environment on a daily basis is an important — and non-trivial — task. VMware monitoring tools are a critical component of a solid security strategy because they help you quickly detect and remediate unauthorized changes and errors that could lead to downtime, data loss or compliance failures.

Every time I build a new VM, add more CPU or RAM, or add more disk space, there’s an impact on the infrastructure as a whole. Now, granted, ESXi is very good at working with these changes, and there are a lot of built-in tools that help. However, the fact still remains that there’s only so much in terms of resources to go around, and sooner or later, I could end up running out if I’m not careful.

So, before I begin discussing tracking the changes, we need to understand why this is important and how the change impacts us.

I have 4 Windows servers built on ESXi 6.0 host, so let’s take a look how the process of running them and installing applications impact servers. I go to the “Performance Charts.” VM-W2K3 is turned on. CPU usage is going higher. 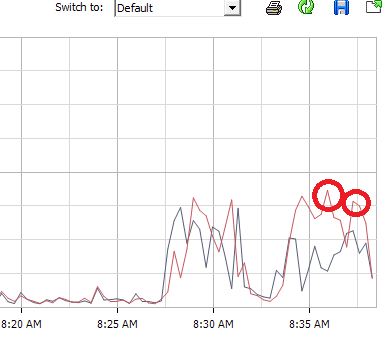 After loading the machine on, there’s no big difference in CPU usage. Look at the two areas circled in “Green.” 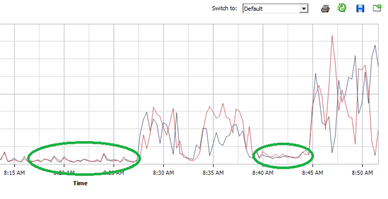 So let’s talk about what’s different between VM-W2K3-3 and the other two machines. The first one I set up as a reservation. I’m treating this as a Mission Critical server, and I wanted to set it so it always had 250 MHz of processor power set aside just for it.

As long as that machine is off, the reservation doesn’t mean anything. The minute I turned it on, 250 MHz of my already very limited processor power is set aside just for the exclusive use of this machine. That means that no other machine can use it.

Another big difference here is that the VMware tools are out of date. While VMware tools help things like making the mouse easier to use, etc., its biggest contribution is revealing what’s going on behind the scenes. One of these is it sits between the VM and the Host. It helps to facilitate better use of resources, etc. So, I’m also going to get it updated and see if that makes a difference.

After the green light appeared, VM-W2K3-4 was powered on. Notice that total usage is higher than before, but it’s behaving rather well.

So next, we sock it to the machines. The danger zone as per VMware is getting these processors above 80-90 percent and keeping them there. If they stay up there, I really need to look at my processors and do something about either adding more or getting rid of some VMs.

I’ve turned on a heavy load on each VM. Remember, this will simulate a software/user load on the machines. After several minutes of letting it run, I see that my CPU usage is nearly maxed out. According to the VMware troubleshooting definition, I am officially in deep trouble.

Remember, we’re looking at one very small piece of what’s going on. To get the full picture, you need to look at what’s happening in memory usage, disk usage, network usage and so on. In almost every case, you’ll see something very similar to what’s happening above.

Now, this was intended to demonstrate to you what growth does to your system. If you don’t have means to regulate growth, you’ll get into the mess very quickly.

What does monitoring changes have to do with this?

The whole key to getting and keeping yourself out of trouble in the infrastructure is acknowledging that changes have impacts.  To make sure those changes aren’t detrimental, we need to implement change management.

Questions the CMB must ask:

If you don’t have the resources to run the machine adequately, or if it really serves no business sense, then the request should be rejected by CAB.

Along with change management, we need to have a way of monitoring things and to protect ourselves against unauthorized changes. We need to watch for changes that have been made. Changes should be reflected not only here, but matched by a ticket as well. Monitoring things will also help evaluate the impact of changes and perform whatever control needs to be done to get processes in accordance with the change management process.

This is where I’d drag in Netwrix Auditor for VMware to do the job for me. It provides visibility into VMware vSphere, vCenter, and standalone ESXi hosts. Netwrix Auditor also serves as a tripwire for potential issues. As an example, this is one change that popped up in the morning report:

What it’s telling me is that VMware tools are out of date. Now ideally, I should have known this or known it was coming, but in case the machine got missed in updates, it serves as notice that we have an issue. Ideally at this point, I’d open a ticket and start planning to get that one machine updated. This email would become part of the ticket as well (you always want to give your auditors as much info as you can).

In summary, anytime we make a change in our virtual environment, expect changes in resources available. These must be planned for and approved.  An effect must have a cause, and monitoring is one way to help make sure process and procedure are adhered to.

Richard Muniz
Richard is a freelance IT consultant, a blogger, and a teacher for Saisoft where he teaches VMware Administration, Citrix XenApp, Disaster Planning and Recovery for IT, and Comptia Server+
Virtual machineVMware security
More great reading
The Basics of Virtualization Security

How to Manage VMware Snapshots